I think this tabulation of date codes is going to become the most tedious part of my Retrochallenge entry – but I’m using the fact I’ve entered Retrochallenge to push past the tedium and just get it done.

Having the data and then using it to align the various components will satisfy some deep OCD tendency within me, so apologies to those who were hoping for more Magic Smoke™ and soldering.

So, in my continuing series of serial number and date code compilations, I give you my 2016 europlus PSU Census:

The “PSU Stamp” is punched into the metal on the side of the PSU near the motherboard’s power molex connector and is on all of the PSUs…except the highest serial numbered PSU, which is also the only one with a date code anywhere externally. See the Figure 1 below for a stamp example and the sticker.

The number listed under “PSU Stamp” for that PSU and the date code is on a sticker in the same location as the other PSUs’ stamped number. The sticker has a dot matrix-printed serial number and date code (and the serial number is different to the number on the main label). This sticker looks very much like the stickers on the silver //e PSU.

I don’t know what the stamped number and sticker serial number represent vs the serial number on the PSUs’ main label, and would appreciate any info on that in the Comments below.

Another external difference is that PSU 160082, which is the only PSU with a stamped number not starting with “T” (see Figure 1), has a sticker at the switch end with the Apple logo and product details (see Figure 2 below) – I wonder if this was from a batch of 110V cases they repurposed for use on 230V units?

I’ll be looking for date codes elsewhere inside the case, but I suspect there won’t be any – there are certainly none obvious on the spare keyboard and keyboard encoder card I have, so I won’t be doing a census of those (“Hooray!” I hear you say).

I will be, however, comparing the date codes of chips on the motherboards vs the QA date code hand-written on them so I can see if I can come up with a rule of thumb and estimate a date for the un-dated motherboard (in the currently lid-less 669150 case). It may just come down to the 6502 date code vs the QA date code if that seems consistent.

As I start to look more closely at the motherboards, I’m noticing differences in the green colour of the board itself, and one board has dark green slots with “feet” (which have holes in them, presumably for fixing via screws/bolts) vs the other motherboards’ black slots. But documenting that sort of thing is really a project for another day…

Have you ever done a refurb like this, documenting such minutiae as you go? I’d be interested to hear about it in the Comments below – primarily so I can see if I’m the only person in the world who would do such a thing. 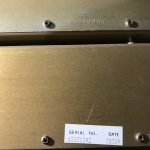 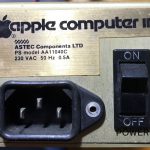